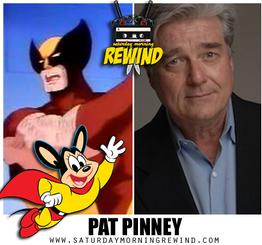 Patrick Pinney has provided voices for a number of animated characters, including Mighty Mouse in the short-lived Mighty Mouse: The New Adventures (1987–1988), Pa Gorg, Uncle Traveling Matt, Flange Doozer, and "Additional Voices" in the animated version of Fraggle Rock, Chico the Bouncer in the hybrid live-action/animated film Cool World (1992), Wolverine in Pryde of the X-Men, Painty the Pirate from the opening theme of SpongeBob SquarePants (1999–present) and Wormguy and Idikiukup in Men in Black: The Series.

He supplied the voice of the Fish Ghoulie in the 1987 film Ghoulies III: Ghoulies Go To College and voiced Stan in the video game The Curse of Monkey Island.