It’s 2016 and you know what that means? It’s time to look forward to another year of new episodes from Saturday Morning Rewind! Join Tim and Gary as they pay their respects to the voice actors that we unfortunately lost in 2015. Additionally, they talk about new programs, episodes and what’s to come in 2016! Following that up, Tim and Gary jump back to talk about cartoons from 1983, well.. they attempt to. Due to a mix up Tim picks cartoons from 1982 and Gary picks from 1983 so it’s an accidental twofer! In the next segment, they discuss their favorite music and song from several non-Disney animated features and then they close the episode out with a discussion of their favorite cartoon theme songs! A lot is packed into 40 minutes so sit back and enjoy another episode of Saturday Morning Rewind!

Welcome to a new episode of Saturday Morning Rewind! In this episode our hosts discuss D23, Club 33, the likelihood that one of them might murder the other one whenever they meet in person for the first time and more! Next, they continue on with their Cartoons by year countdown with the year 1981! For the body of the episode, Tim and Gary talk about their favorite lesser known cartoon characters and their favorite underrated cartoon series! Hear Tim’s new accent! Or don’t. It’s pretty weird. Listen as Gary tries to explain the concept of Earthworm Jim in human words. Together they talk about everything from Country Crock to night-lights to Bobcat Goldthwait! Sit back and enjoy an episode all about the under-appreciated!

Episode 043: Movies Based on Cartoons

Tim and Gary are back to talk more about The Eagles! Well, actually cartoons and movies but Tim saw the Eagles perform live recently so they are talked about as well! Also in the process of catching up, Gary discusses his recent trip to Awesome-Con 2015 in Washington DC! In the Cartoon News section Tim and Gary discuss news of the new live action Disney films and what’s going to happen to the Simpsons now that Harry Shearer has left the show. Also starting this month, a new segment where they list their favorite cartoons by each year; this month, 1980! Last but not least, they discuss their favorite live action movies based on cartoons. Will they pick G.I. Joe: Rise of Cobra over Transformers? Did they choose The Smurfs, Alvin and the Chipmunks, Marmaduke, or Yogi Bear? Tune in to find out!

Tim and Gary finally return together after six episodes apart. This episode kicks off with our host’s favorite cartoons from 1985! 1985 was a great year for cartoons and an even better year for toys so that becomes a topic itself! After that, Gary releases the first installment of his new “Dream Big” segment with an interview with artist Shawn Durington (Shawn’s Custom Characters) Afterwards, Tim and Gary sit back to discuss all of the news that they’ve missed over the past few months including Nickelodeon, Ducktales and more!

Join Tim and Gary as they talk cartoons...

Welcome to another exciting episode of the Saturday Morning Rewind podcast! This month brings you something a little different. Tim and Gary sit back and discuss all things Mario! Of course, there is also some talk about current events and Tim and Gary pick their favorite cartoons from 1984! In addition to talk of the first three Mario games, Tim and Gary also talk Mario Kart, Super Mario Land, Goldeneye and more! Tim also attempts the first ever podcast speed-run (that they’re aware of) live on the show! Join them for all sorts of Nintendo based fun, won’t you?

Tim and Gary return with a new episode to honor the legendary Stan Freberg (1926-2015) with a tribute. Sit with them and relive some of Stan’s finer performances and travel down memory lane with Stan as he relives his early days in Hollywood! In addition to all of the great Freberg talk, Tim and Gary also break down some new trailers in their first Summer movie review segment! Additionally, April birthdays, Gary forgets his Twitter handle, Tim struggles to pronounce cities in California, a nice old lady calls to find her friend Pearl and more! It’s a fun episode full of past memories and upcoming adventures!

Aaah, Christmas! It’s the most wonderful time of the year… to listen to Saturday Morning Rewind! In this episode Tim and Gary jump right into the holiday spirit! They let some secrets slip about their upcoming Christmas plans including Tim’s first ever Retro Christmas and Gary’s intention to slide on waterslides all Christmas long! But, it’s not all future-talk as Tim and Gary talk about their favorite and least favorite Christmases. Additionally, they discuss their favorite animated Christmas specials as well as the favorite cartoon episodes based on that magical time of year. There’s plenty of Yuletide cheer to be found in this episode!

The origin story and best of show! Ahh, the humble beginnings of a podcast. Listen as Tim and Gary tell the story of how the podcast was born and how they got to be where they are now! Also in this episode, Tim and Gary lay out all of their plans for the D23 Expo and Disneyland! Lastly, they settle in to talk about the past three years of the podcast and their top 3 favorite interviews! Come join them for their third anniversary spectacular!

It’s time for another episode of Saturday Morning Rewind with Tim, Gary and Gary! No, you’re not seeing double. Tim and Gary are joined by Gary Micelli to talk about Space Jam, Space Jam 2, the television return of classic Nickelodeon and so much more! Also included in this episode, an interview with Sam Kwasman by Jason (of DAF Radio), shows Tim hates that everyone else loves and impressions by Gary Micelli! Join us for another exciting episode of Saturday Morning Rewind!

Join Tim and Gary for the first time EVER as they discuss the year 2014 and look forward to the year 2015. They reflect on the voice actors lost in the year 2014 in the first “In Memorium” segment. In a happier segment they also celebrate voice actor birthdays and the new releases coming to DVD, Amazon and Netflix this January! Join them for the main portion of the podcast where all sorts of statements are made including a lot of Katy Perry talk, the issue of dating one’s self and how to Let Frozen Go. They also discuss things that they’re looking forward to in 2015 including D23, Disneyland and more! Will Tim ever figure out what year it is? Does Gary truly break his microphone trying to give himself a high five? All of these questions and more will be answered in Episode 33 of Saturday Morning Rewind!

In this episode Tim and Gary talk about their love of Sesame Street (Favorite Muppet, Cast Member, Skits, Songs, you name it...).  They also talk about their favorite 1986 cartoons and play a new game.  Come and join in on the fun!

049 BONUS EPISODE: Our trip to Disney’s D23 Expo and Disneyland!.

The adventures of Tim and Gary in California! This episode chronicles exactly what happened from beginning to end on their adventures throughout D23, Disneyland, Hollywood and more! Join them as they talk about all the famous people they saw, met and interviewed! Listen as they discuss their trip into Hollywood for a movie premiere! Laugh as they relive their evening at Katie Leigh’s place with $3.00 chocolate wine and mistaken identities! All of that and so much more can be found in this bonus episode of Saturday Morning Rewind! 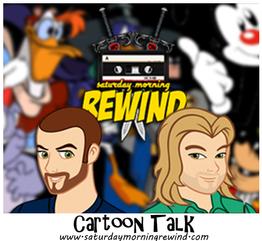